I am a moderate Star Trek fan.  I have never dressed up like Uhura and gone to Comicon or anything, but I’ve seen all the Star Trek movies (most of them since Star Trek V in the theatre) and have watched many of the original TV reruns.  This is mainly because my dad was a huge fan, not able to go on dates on Fridays in the 60’s because he had to be home to watch the show (life was so hard before DVRs).  I never got into any of the TV spin-offs though.  So, when my husband watches The Next Generation (TNG), I refuse to watch it.  It’s not the original.  Cheesy sci-fi in the late-80’s and 90’s just isn’t the same, especially without Shatner.  However, it’s sometimes hard to avoid hearing or seeing some of it in our one bedroom loft. 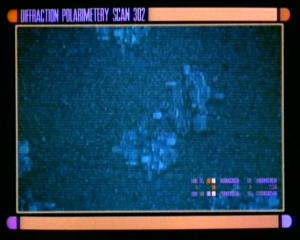 You might have to squint really hard to see the nanites.

So when my friend Kari sent me an article about how nanoparticles can control blood sugar in diabetics for up to 10 days, I immediately thought of a TNG episode that accidentally seeped into my ear canals (and also guest-stars Dr. Bob Kelso from “Scrubs”).  It was an episode in which nanites, or microscopic robotic devices, could be put into humans and programmed to do medical tasks.  The actual episode storyline revolves around how the tiny computers “evolve” and start attacking the ship.  Eventually the nanites are given their own habitat to live in as autonomous creatures (reason #835 why I can’t watch this show).  But I digress.

Are “nanites” for medical use becoming a reality?

Yes and no.  Actual molecular nanorobots that can perform work inside cells are not a reality yet, but nanoparticles are.  Most nanoparticles used in the medical field utilize coatings that allow drugs or other useful molecules to be transported in the blood stream, targeted to a specific site within the body, or shielded from the immune system to avoid degradation.   Cancer drugs such as Abraxane and Doxil are two examples already in use.  Abraxane is a common cancer drug (paclitaxel) bound to a naturally-occuring blood protein (albumin).  The nanoparticle exploits the feeding system of the tumor, which takes in nutrients normally bound to albumin that are circulating in the bloodstream.  Tumors basically eat themselves to death when Abraxane is present, because they “eat” the albumin…and the drug that is bound to it.  Doxil is another cancer drug (doxorubicin) that is enveloped in a polyethylene glycol-coated liposome (similar to a cell membrane) and is used to treat Kaposi sarcoma, which causes skin tumors.  The coating targets the drug to the skin and the liposome reduces cardiotoxic effects (heart problems) of the drug.  There are many more nanoparticles currently in use, and if you want to read further, Wikipedia has a pretty good article on nanomedicine.

Using nanoparticles for long-lasting blood glucose regulation is a real breakthrough in the treatment of diabetes.  In a normal pancreas, the beta cells transport glucose from the bloodstream into the cell and metabolize it.  The energy and metabolites from glucose metabolism cause a series of events in the cell to release the hormone insulin into the bloodstream.  This mechanism allows the beta cell to sense the blood glucose levels and secrete the correct concentration of insulin in response.  People with type 1 diabetes have lost their beta cells (due to an autoimmune reaction) and can no longer produce insulin.  What makes this new nanoparticle exciting, is that it creates a closed-loop system that releases insulin by “sensing” circulating blood glucose levels, similar to a beta cell.  I have previously posted about an external “bionic” pancreas, which is an open-loop system that consists of an external continuous glucose sensor, an insulin pump, and a glucagon pump.  This type of system relies on electronic automation and accuracy.  Nanoparticles rely on chemistry for glucose sensing and insulin release.

WARNING: this paragraph contains chemistry, read at your own risk.  The nanoparticle that the Anderson lab created consists of insulin, glucose oxidase, and catalase inside an m-dextran matrix surrounded by a chitosan or alginate coating.  Insulin is usually released by the pancreas in response to increased blood glucose levels and the nanoparticle is able to “sense” blood glucose levels with glucose oxidase, an enzyme that converts glucose into gluconic acid.  Gluconic acid decreases the pH of the nanoparticle to degrade the m-dextran sphere and release the insulin.  The chemical reaction of glucose + oxygen + water catalyzed by glucose oxidase not only produces gluconic acid, but also hydrogen peroxide (which is toxic at high levels).  Therefore, catalase is the other enzyme in the particle that converts the hydrogen peroxide back into water and oxygen (to keep the glucose oxidase reaction continuing).  The spheres are coated with positively-charged chitosan or negatively-charged alginate to form an electrostatic network of nanoparticles, or nano-network.  Creating this three-dimensional, porous structure of tiny spheres increases the surface area-to-volume ratio to make the “sensor”, or the interaction between glucose in the blood and glucose oxidase in the nanoparticle, more efficient.

In case you skipped the previous paragraph, what makes this nanoparticle so great, is that it uses chemistry (which is usually infallible) to work.  The nanoparticle is engineered with many layers to encapsulate everything necessary for glucose concentration to be sensed, insulin to be released, and no cytotoxic (cell-killing) byproducts to be created.  And it works pretty well in mice.

Usually people with type 1 diabetes have to inject themselves multiple times a day with insulin.  They must also calculate how much insulin they should inject based on multiple factors: food intake, blood glucose measurements, and physical activity.  In this study, after injecting the 150 microliters of the nano-network into a diabetic mouse, it took 10 days for the nanoparticles to deplete.  Some mice maintained normal blood glucose levels for 15 days.  Two weeks after administration, the glycated albumin ratio (a measure of diabetic control over a few weeks) in mice treated with nanoparticles decreased from 10% to 6% (from a diabetic to a normal range).  If this type of system can be used in humans, it would increase the quality of life for diabetic patients considerably.

The problem with this nano-network system is that it is injected under the skin and sits in a visible lump until the nanoparticles break down and get cleared from the area.  Even though all the materials in the nanoparticle are biocompatible (not harmful to the body), there is local inflammation at the injection site while the lump of nanoparticles are physically there.  This system has yet to be tested in humans, who are much larger than the mice used in this study and may pose different problems.  The authors also don’t mention any experiments with a second injection after 10 days.  Insulin-dependent diabetic patients need to continue their insulin treatment for the rest of their life, so if the nanoparticles or certain components never get completely cleared from the bloodstream or begin building up after multiple injections (the authors do not mention blood pH measurements), then this treatment is not as feasible.

For now, nanoparticles are very promising in many different medical fields.  However, as electronic technology becomes smaller and smaller, nanorobots are not completely out of the question.  There is some really cool science going on in the John Rogers lab at the University of Illinois.  They have created dissolving electronics, stretchable lithium ion batteries, and malleable circuits that could be integrated into the body in the future.  Scientists just need to create electronics that are as reliable as biology and chemistry – and make sure they don’t evolve and take over the ship.