Archive for the tag “Earth Science” 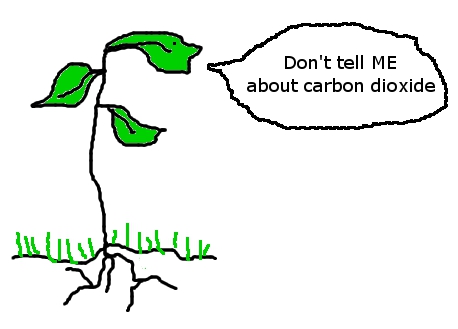 Tell that to a plant, how dangerous carbon dioxide is.

These words were spoken by Rick Santorum, who is vying for the Republican nomination for President of the United States.  This is not a political blog, so I’m not going to say anything about political views here, but I do have something to say about scientific ignorance.

Before I go further, I have to address the lack of English grammar.  He was probably trying to sound like he was speaking off-the-cuff, but it didn’t work for me, especially during a speech.  ‘Nuff said.  (and that’s my off-the-cuff comment lacking grammar)

I would like to go back to grade school science now and talk about ecosystems.  Ecosystems are a network between organisms and their environment, linked through nutrient cycle and energy flow.  Energy enters the system through photosynthesis (plants convert carbon dioxide into carbohydrates, oxygen, and other compounds with the sun’s light energy).  We, as humans, eat the plants (or eat other animals that ate the plants), breathe the oxygen, and release carbon dioxide into the air and organic compounds into the ground, and the cycle continues.  Santorum was attempting to tell people that carbon dioxide is not dangerous because plants use carbon dioxide, but he failed to mention/realize/understand that humans and plants have opposite roles in the ecosystem.  And what is good for plants is not necessarily good for humans.  For example, sitting outside in the sun all day, every day would most likely result in sun burn and skin cancer – not oxygen production.

I have another pearl of wisdom for you, Santorum:  carbon dioxide CAN be dangerous to plants.  Take volcanic Mammoth Mountain in central California, for instance.  In the early 1990s, trees began dying from high concentrations of carbon dioxide gas seeping into the soil from the adjacent volcano.  The ground fractured during small earthquakes and a most likely, a reservoir of gas trapped beneath the earth’s surface is leaking.  In addition, magma releases gases as it moves toward the surface of the earth.  The problem with too much carbon dioxide in the soil?  It interferes with the plant’s uptake of oxygen and nutrients through its roots.  According to a 2000 report from the U.S. Geological Survey, more than 100 acres of trees have died near Mammoth Mountain from too much carbon dioxide.

If I ever meet Santorum, maybe I’ll inform him of the differences between humans and plants, because he seems to need a refresher.  And next time I talk to a plant, I will let it know how dangerous carbon dioxide can be.